Sept. 13th downlink awarded in recognition of the National STEM Scholar Program, a collaboration between NSCF and the Gatton Academy of Mathematics and Science at WKU 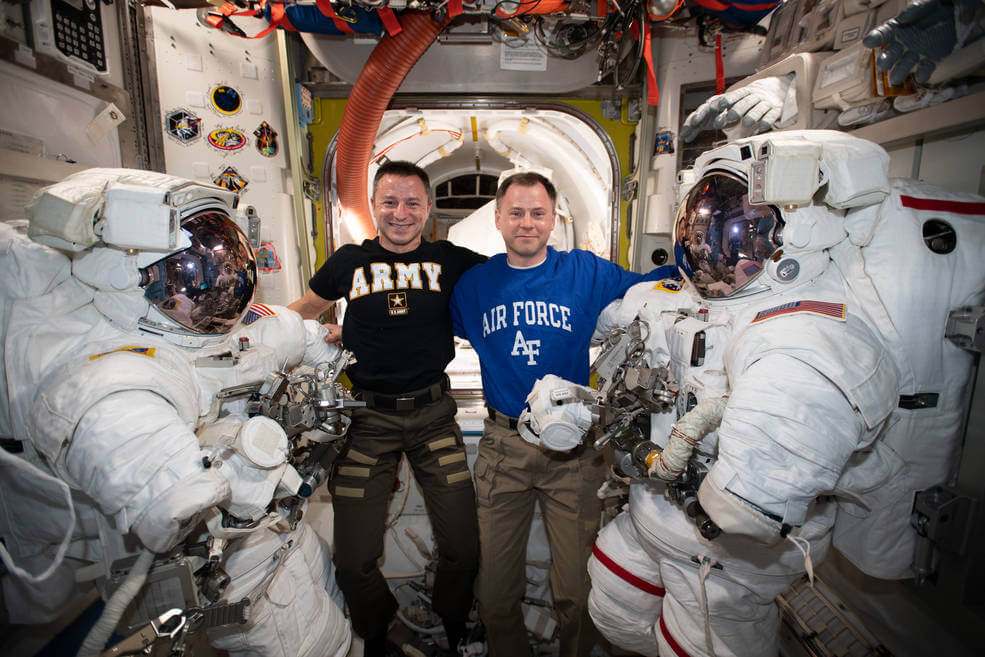 Expedition 60 crew members Drew Morgan and Nick Hague pose with the spacesuits they wore during a recent spacewalk to install equipment that will accommodate the future arrivals of commercial crew spacecraft. Photo credit of NASA.

Teachers, students and fans of education and space worldwide can tune in to watch the downlink streaming live from Louisville. The recorded downlink will be available any time after the event on YouTube or NASA TV.

There was seated downlink viewing at Kentucky Science Center (KSC) and the Frazier History Museum in addition to a half-day STEM (science, technology, engineering and math) event in downtown Louisville. Event partner KSC, ranked one of the top 10 children’s museums in the U.S., will include multiple university and industry STEM-focused aerospace exhibits in their hands-on science experience. The 14-foot Owsley Brown II Portable Planetarium from the Rauch Planetarium at UofL will be housed on the first floor of the Frazier History Museum, and 4th Street Live! will stream the Earth-to-Space conversation on the jumbotron between Muhammad Ali and Liberty on 4th Street.

Students and teachers from Jefferson County Public Schools, Breckinridge County and Warren County schools and the Archdiocese of Louisville participated in the downlink and half-day STEM event.

Thanks to the generosity of the Gheens Foundation, admission to KSC was made available free of charge to all students, teachers and members of the community. Free admission to the Frazier History Museum was made available by a grant from NSCF. Event sponsors PNC and the J.B. Speed School of Engineering at UofL provided generous support for the day.

The National STEM Scholar Program, a collaboration between NSCF and The Gatton Academy of Mathematics and Science at Western Kentucky University, provides advanced STEM training, national network building, project funding and yearlong mentorship for science teachers motivating students at the tipping point of life-long science interest – middle school. There are currently 40 Scholars in 23 states; 6 are in Kentucky. Students from the 6 Scholar schools in Kentucky will be asking astronauts the questions submitted by all 40 Scholar schools across the country.

“There is a critical need to ignite middle school student interest in STEM subjects now to cultivate the scientists, engineers and explorers of tomorrow,” said National Stem Cell Foundation CEO Paula Grisanti. “We are delighted by the opportunity to bring this lifetime educational event to Louisville – and to students everywhere who will see the downlink stream live globally from Louisville on NASA TV.”

“Congratulations to the National Stem Cell Foundation and the Kentucky Science Center for orchestrating today’s space station downlink and education day,” said Patrick O’Neill, Senior Manager of Marketing and Communications for the International Space Station U.S. National Laboratory. “The ISS National Laboratory is honored to join today’s festivities – our hope is that outreach events like this create excitement and inspiration for those who will become our next generation of scientists, engineers, and explorers.”  O’Neill will speak to students and teachers prior to the downlink.

“We may not know what the next generation of jobs will look like, but we know critical thinking is key.” said Jo Haas, CEO of the Kentucky Science Center. “By teaching 21st century skills, we are best preparing our children for the workforce of the future. Science, technology, engineering and math will play a vital role in developing that workforce. We are always looking for new and innovative ways to inspire a life-long love for learning, and we’re excited to be a part of this once-in-a-lifetime opportunity for students to interact directly with astronauts on the International Space Station.”

As part of their effort to promote the event and STEM learning, NSCF has also launched a “Send My Kid to Space (Camp)” contest. The winning parent and child will attend Family Space Camp® in Huntsville, Alabama next summer. To enter, parents should visit the contest website and share their most compelling, over-the-moon reason for sending their kids to space (camp). Entries will remain open until 5 p.m. on September 27, 2019.