Development of a working classroom ecosystem and aquaponics lab

Angela’s Big Idea: Angela’s classroom analyzed water quality by collecting macroinvertebrates, demarcated a forest plot with a District Forester and monitored that plot for forest health and tree diversity. Recently, Angela introduced an aquaponics component to her lesson plans by creating a working ecosystem right in the classroom.

Interesting Facts: “I teach 7th grade Life Science in Gorham, Maine, which is about 10 miles west of Portland. Before I was a teacher I was a biologist. I grew up in Oshkosh, WI and earned my BS in Marine Biology from UNCW and a MS in Ecology and Evolutionary Biology from UConn. I spent a few years as a biologist in Florida but never planned on being a teacher. Starting a family and moving north changed my perspective and when I became a teacher in 2002 I realized that teaching is where I should be, and what I was meant to do.”

In 2009 Angela won the Presidential Award for Excellence in Mathematics and Science Teaching. Read more.

In her own words: "I love getting students excited about their world right here in Maine. How do you make maple syrup? What is a fiddlehead and can you eat it? What is a Forest Inventory Growth Plot and why are they so important in Maine? Can you eat bugs for protein? What are macroinvertebrates and what can they tell us about our school pond? I enjoy having students experience the “wow,” the “icky,” the “eww,” the “ohhhh” and getting them excited and invested in their world around them." 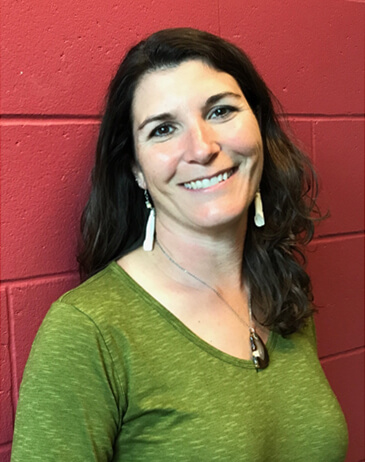 Kiki Contreras (from left), of Seattle WA, Val Pumala, of Cameron WI, and Angela Gospodarek, of Gorham, ME, work together during an escape room activity Monday, June 5. The scholars were split into teams and used the microscopes they made earlier in the day to solve clues. (Photo by Brook Joyner)
On being a 2017 STEM Scholar: “My Challenge Project built fish tanks in our classroom, and the idea was to create a system to be self-sustaining – we raise all of our own meat and vegetables so my kids know where all of their food comes from – now my students can see the benefits of an aqua-culture system too.”